at the end of january, me (fuzzy), junior, snuffy and tweak collected my cousin wheatus & little wheaty and were on our way to north wales. the human had made poppy hats for all the popps.

when we got to the apartment, the owner offered to help bring the luggage from the car – let’s just say that the hs does not travel light, and he was doing a bit of puffing by the time he’d carried three bags/cases up two flights of stairs! well, he did offer…

the forecast wasn’t very promising for the weekend, so we were soon on the beach while it was still dry.

sheltering from the wind

, er made a sandcastle 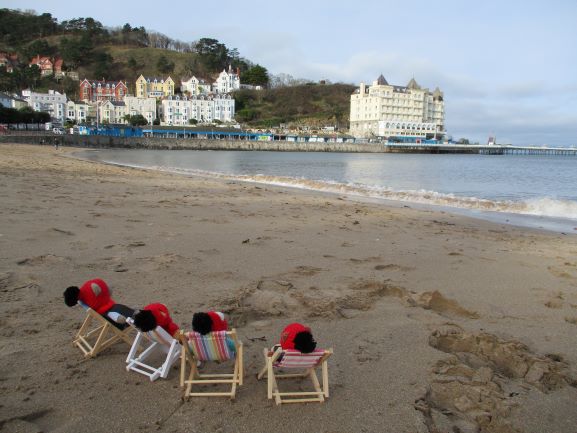 back on the beach

in the evening the popps had a few games of dominoes; snuffy & wheaty were winning by a good margin, but junior & tweak were catching up by the end. (junior & tweak won the next night – you’d have thought that they had won the world cup by the way they were running about shouting that they were the champions!)

friday morning was spent in town, and in the evening there was a show described as ‘immersive rock theatre’  based around two alarm albums, with narrative by sean jones between the songs.

at 11pm they showed the big ben bongs to mark brexit, then finished with a rendition of ‘always look on the bright side of life’.

on saturday there was a pre-show reception with mike peters for the first three hundred who had booked tickets for the weekend, including us! we were right at the front!

unlike last year where we had three bands before the alarm came on, this year there was one band that did two songs (mp’s sons and their friend) then some (good 80’s) music until dave sharp came on for a whole hour  :o/

during one of their songs, he (& some members of the audience) chucks a pack of playing cards. we couldn’t find any alarmy ones on the floor after the show, but the human saw that a couple had landed behind the barrier and a tidier-upper kindly passed one to the human…

we rescued a card

on sunday morning there was a mass walk to the end of the pier. my human, who isn’t a very fast walker normally, walked as fast as she could to get a good spot for the sing-a-long.

he sang a couple of slade songs including ‘merry christmas everybody’ to finish off the gathering.

best seats on the pier

on sunday evening, dave sharp (former member of the alarm) was playing just round the corner from the apartment. as we’d nothing better to do …

when we got there it was nearly empty, all but three people. there was a sofa which they chose to sit on. my human was going to say “wake me up when it starts”, but instead said “wake me up when he’s finished” only for hs to point out that one of the three was ds himself…tra la laa

the best bit was when the human needed the loo, it was quicker to go back to the apartment than through the crowd and past the stage, but you don’t need to know that… (35 paces, if you’re wondering).

when we checked out on monday morning, mysteriously the owner of the apartments had had to ‘pop out’.

before we went home via wrexham and stoke, we popped along the promenade to have a quick photo by some early dafty-dils.

last year when we went to the gathering it was a one-off, and again this year was a two-off.

we were really lucky to get tickets for next year’s event as there were only 300 tickets available and it was sold out in two minutes!